Jan De Nul Group subcontracted EEW SPC for the supply of all 194 pin piles needed for the Formosa 2 Project. EEW SPC started fabrication in January at three different yards in South Korea and Malaysia. This first pile delivery, one of eight batches in total assigned to the German BBC Chartering, is a significant milestone given the COVID-19 outbreak and its severe impact worldwide. All the pin piles will be stored in Taichung Port until foundation installation commences later this year.

Developed by Macquarie’s Green Investment Group, JERA and Swancor Renewable Energy Company Ltd., and located between four and ten nautical miles off Miaoli County, the 376 MW Formosa 2 OWF will have 47 Siemens 8 MW turbines on jacket foundations in up to 55m water depth.

The 109m long and 10m wide propylene splitter is one of the largest items ever delivered in a single piece to the Port of Antwerp.

Mammoet’s expertise delivering end-to-end solutions for projects of this scale led to Borealis and Tecnimont, the plant’s engineering, procurement and construction management (EPCM) partner, awarding it the contract for the transportation and installation of the site’s 35 heaviest pieces of equipment in late 2019. The successful transportation of the plant’s largest component signals the first major milestone during the plant’s two-year construction phase.

Having consulted Borealis on the most efficient delivery timetable, Mammoet’s team of experienced engineers and field workers started preparing the quay for the load-out four days prior to the transportation date. The splitter arrived on a barge from Spain, and once the barge was equipped with ballast pumps and winches, the load-out and transportation operation was executed.

To minimize disruption to both the project’s schedule and the port, transportation of the splitter occurred overnight, after Mammoet had arranged short-term road closures with local authorities.

84 axle lines of SPMT were mobilized to transport the splitter across the 1500m stretch from the Port of Antwerp to the Borealis production site in Kallo.

“Safety is our greatest priority in every operation we deliver. The size of the C3 splitter did not make this job any different,” explains Mammoet Project Manager, Stefan Bostelaar. He continues: “We’ve been planning this operation since the contract was signed last year. Fortunately, we’ve been able to coordinate the operation from our office in Antwerp, and in cooperation with our clients, we’ve scheduled the project to optimize construction timelines.”

The next stage of the project will see Mammoet lift and install the C3 propylene splitter in October. 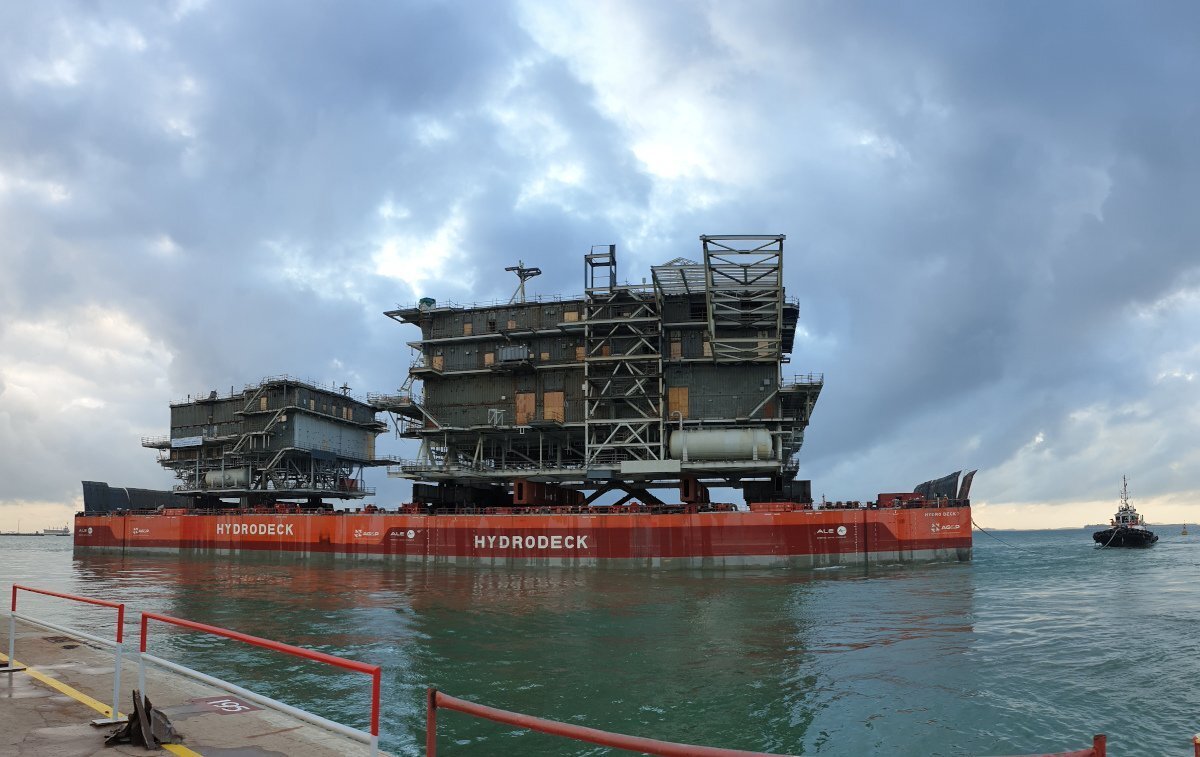 Its task was to transport a 5,000t offshore substation topside and a 1,500t reaction compensation station topside from Batam, Indonesia to Singapore.

Hydro Deck’s large cargo surface area (5,600m2) allowed Mammoet to hold the two topsides and transport them in a single trip. This reduced the necessity to perform operational work more than once.

Combining Hydro Deck’s rapid ballasting system capacity with the flexibility of having roll-on/roll-off ramps on both the bow and stern of the barge, Mammoet minimized movement and rotation of the Hydro Deck. This was crucial because the operational period saw high sea traffic at both Batam and Singapore shipyards.

For this project, Mammoet redesigned the mooring arrangement by installing four additional mooring winches and eight roller fairleads on the Hydro Deck. This meant the barge did not need to be rotated, with load-in and load-out performed from either the bow or stern side.

Using a minimal number of maneuvers, the team was able to perform the load-in and load-out efficiently, maintaining the high safety standards required by the shipyard, while accommodating the reduced space available due to high sea traffic. A close eye was always kept on safety; by ensuring the rapid ballast system capacity met standards, and through maintenance on the system taking place on a regular basis, sharing updates with the client.

Besides the use of Hydro Deck as an interim barge, Mammoet supplied many services as a single point of contact. These included barging, weighing, mooring, ballasting, towing, tug management, plus load-out and load-in using 200 axle lines of SPMT.

Mammoet’s complete solution enabled the transportation of the topsides in one single journey.

The Hydro Deck is a floating pontoon developed in collaboration with AG&P for a range of operational needs in locations with extreme tidal variations. It increases the efficiency of operations where port facilities are less available or – as here – rapid ballasting is a key consideration.

Sarens expertise in the wind energy sector has been an asset in helping clients like FairWind and Siemens Gamesa erect several wind turbines at a Norwegian wind farm in Kvitfjell Raudfjell. Beginning in August of 2019, Sarens was on site to see the project to completion.

The following teams and equipment were deployed to carry out the operation:

The third preassembly team used an AC 500-2 in HASSL configuration to assemble the first two tower sections and an Explorer 5500 auxiliary crane for tailing and relocating the 500-tonne crane.

“In the beginning, there was only one main crane: the LG 1750,” says project manager Adam Kopaczewski. “After three months, the client decided to order one more main crane team, and from November 2019 onwards we also had the LG 1550 and AC 200 as a second main team.”

An advantage of using the LG 1750 and LG 1550 cranes was that they did not need an SL for assembling this particular type of wind turbine at a worksite difficult for crawler cranes to manoeuvre. The wind farm is located on a mountaintop, and when relocating crawler cranes from one pad to another, the crew would have had to completely disassemble them. This is why Sarens opted for mobile lattice boom cranes, saving considerable time when moving cranes.

All cranes arrived via special vessel and were unloaded 40 kilometres away from the project site, at Tromso harbour. Then, Sarens transported the crane components to the site via truck. Assembling the cranes proved challenging: Sarens had to use a special container to support the main boom because the level difference between the main crane’s hardstand and the boom assembly area was sometimes as great as 10 metres.

The Sarens crew lifted all wind turbine components, including three tower sections, the nacelle, the generator, and full rotor. The largest load was the nacelle and generator, which weighed 103,5 tonnes!

Aside from the terrain, weather was the biggest challenge the crew faced. From November through April, the worksite was covered in snow as deep as seven metres in some areas. Meanwhile, wind speeds sometimes reached almost 40m/second.

Nevertheless, the crew worked tirelessly to complete this project. Working in two nine-hour shifts, they lifted each of the wind turbines in place. The team included several crane drivers, ten riggers, five truck drivers, and two site managers. Sarens would like to congratulate each of them for their tireless effort and dedication to this important project.