Connect with us
ICTSI inks contract for operation and development of Cameroon’s Kribi terminal. Image: ICTSI

International Container Terminal Services, Inc. has signed the concession contract with the Port Autonome de Kribi (PAK) for the development, operation and maintenance of the Kribi Multipurpose Terminal (KMT) in Cameroon.

With the signing of the contract, KMT, a subsidiary of ICTSI, is now the official concessionaire of the multipurpose terminal for the next 25 years.

At the signing ceremony in the Southern region of Cameroon, Hans-Ole Madsen, ICTSI Senior Vice President and Regional Head for Europe, Middle East and Africa, thanked the Government of Cameroon and PAK for placing their trust in ICTSI.  He added:  “ICTSI is very proud to partner with Cameroon and the Port of Kribi in the operation and development of the Kribi Multipurpose Terminal.

KMT is a newly built deep-water port located 150 kilometers south of Douala. Phase 1 consists of 265 + 63 meters of berth and a 10-hectare yard. Phase 2 will include an additional 350 meters of berth and 23 hectares of yard. Kribi port is surrounded by the Kribi Industrial Area, a 262 square-kilometer zone destined to accommodate new industrial and logistical developments supporting the growing Cameroonian economy.

Mr. Madsen also stated ICTSI’s goal for the terminal:  “Our purpose as a company is to make the Port of Kribi a driver for positive and sustainable growth, thus ICTSI will work diligently to partner the Cameroonian business community by providing efficient and safe port services. Our services will act as a catalyst for Cameroons foreign trade and we will actively promote the Kribi Logistic Corridor – encompassing Cameroon, Chad, Central African Republic, Republic of Congo, Equatorial Guinea and Gabon – an area home to more than 50 million people.  We already have a team on the ground – headed by Mrs. Kathy Magne – and we expect to be fully operational within the next couple of months.”

KMT is purposely built to handle multipurpose shipping services including roro, project and heavy lift cargo, forestry products, dry bulk and other general cargoes, and to offer support services to the oil and gas industry.  KMT provides 16 meters of deep water access and is equipped with state-of-the-art handling equipment including two mobile harbor cranes, providing an annual capacity of 1.5 million tons. KMT is capable of accommodating the largest vessels plying the waters today.

ICTSI will further invest in KMT’s infrastructure and superstructure, and by 2024 the port will double in size. The expansion will include additional modern handling equipment, storage facilities and modern IT platforms.

Damen to deliver two RSD Tugs 2513 for Port of Antwerp 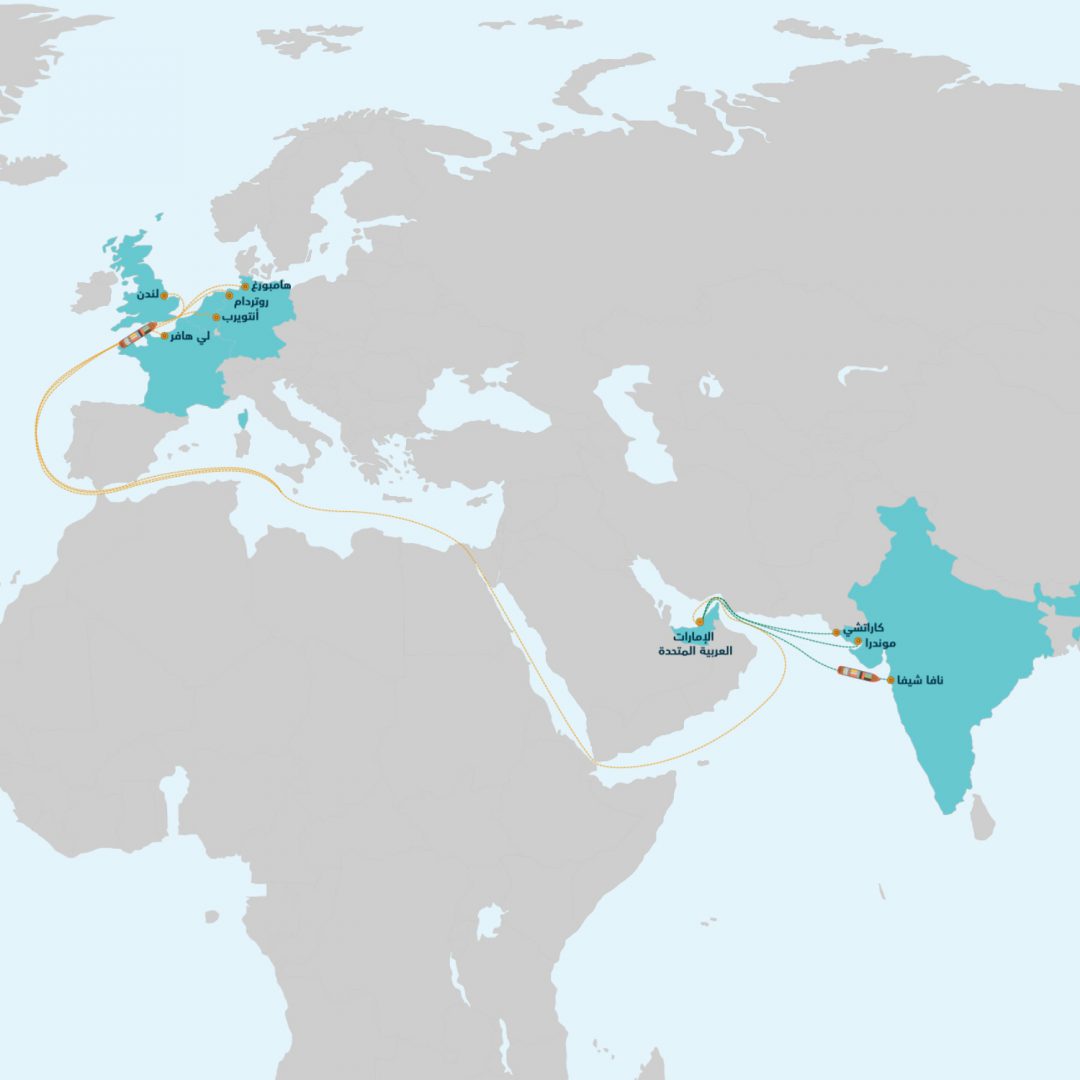 CSP Abu Dhabi Terminal, the first overseas greenfield project of COSCO SHIPPING Ports Limited, has announced the start of a direct, weekly service to several ports across Europe and the Indian Subcontinent.

Operating from Abu Dhabi Ports’ flagship deep-water port, Khalifa Port, where the terminal was established as part of a 35-year agreement with CSP, and serving as a regional base for COSCO SHIPPING Ports’ global network of 37 ports, the new direct service will be served by a fleet of eight vessels on rotation, ranging in capacity between 10,000 to 13,000 TEU.

Direct exports from Abu Dhabi to the ports of Rotterdam, Hamburg, London, Antwerp, and Le Havre, will consist primarily of polymers while returning vessels will carry a mix of general and project cargo imports. The ports of Karachi, Nhava Sheva, and Mundra will also benefit from the new service.

“Our new services will significantly increase the movement of cargo exports and imports between Abu Dhabi, Europe and India, providing our customers with solutions to tackle their international shipment needs, as well as the opportunity to target new markets.”

“The ability to connect with some of the world’s most important maritime hubs in Europe and the Northwest Indian Subcontinent will enhance Abu Dhabi’s reputation as a leading facilitator and enabler of global trade in the 21st century.

“Not only does this announcement bolster our existing partnership with COSCO SHIPPING Ports Limited, but it also ensures our other customers will be well positioned to broaden their horizons by engaging with new trading and logistics opportunities all around the world.”

Since its inception, CSP Abu Dhabi Terminal has facilitated the local manufacturing, warehousing, and logistics sectors to not only flourish within the emirate of Abu Dhabi, but to also expand their reach across markets in the Middle East, Africa, and beyond.

The direct services are expected to lend additional support to customers across the region and clients of the Khalifa Industrial Zone Abu Dhabi, providing faster transit and competitive rates for their import and export activities.

In April 2020, on the passing of the first anniversary of its soft launch, CSP Abu Dhabi Terminal’s AED 1.1 billion deep-water semi-automated container terminal marked several milestones including the handling of over 540,000 TEU.

The close of April also saw the terminal achieve more than 1 million hours without lost-injury time, a feat that was realised thanks to CSP’s adoption of several global HSSE best practises including strong compliance with health and safety protocols within the working environment, and a drive to continuously improve safety performance across the entirety of the organisation.

Forging ahead, CSP Abu Dhabi Terminal will continue to monitor the performance of its direct service to Europe, along with other service patterns, and based on market conditions and business requirements, adjustments to vessel deployment, port calls, and even the launch of other regional services will be considered.

HMM announced that the company has signed a sales and purchase agreement with CMA CGM for the sale of its 50% stake minus one share in Total Terminal International Algeciras, a container terminal in the south of Spain.

Shares of TTI Algeciras are owned by HMM and HT Algeciras which is a special purpose company wholly controlled by HMM. HMM directly owns a stake of 50% minus one share, with the remaining 50% stake plus one share held by HT Algeciras.

HMM has decided to sell its own 50% stake minus one share but still maintains its position as the largest shareholder through HT Algeciras.

The financial details including the price of the deal were not disclosed.

HMM expects a great synergy effect based on strategic cooperation with CMA CGM in terms of enhancing profitability and operational capabilities by securing additional cargoes.

HMM official said, “TTI Algeciras has a great geographical advantage to play an integral role as a transshipment hub located at the centre of containerised cargo flow on main trade lanes. We believe TTI Algeciras will take centre stage in the Gibraltar area as it has a high potential for future growth and development. We are expecting more business opportunities in the years to come based on stable operations of the terminal.”

This transaction, subject to regulatory approval, is expected to be completed in Q4 2020 for joint operations to be started.

Meanwhile, TTI Algeciras was formerly operated by Hanjin Shipping but HMM acquired a 100% stake in the terminal in 2017. 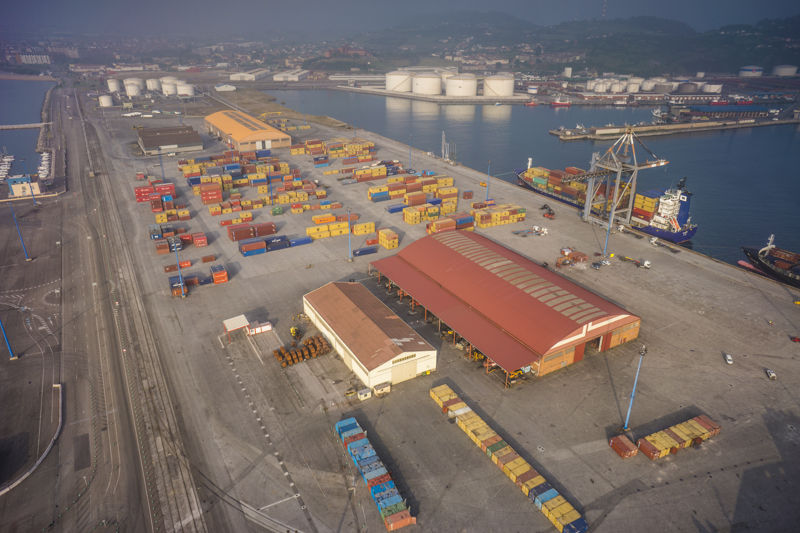 Block trains connect APM Terminals Gijon with Seville, Murcia, Valencia, Barcelona, Zaragoza, Madrid and Burgos up to twice a week. Scheduled to arrive at APM Terminals Gijon in time for a Friday departure, the vessel will arrive in Liverpool, UK on Monday and Dublin, Ireland on Tuesday. The service is suitable for all types of containerized cargo, including hazardous cargo.

Located on Spain’s northern coast, APM Terminals Gijon is ideally placed for the UK. “In addition to the clear environmental benefits offered by this service, customers can also cut the time to UK and Irish markets from Spain, compared to shipments made from other Spanish ports,” says Terminal Manager, Miguel Ruiz.

Each block train has a 52 TEU capacity and the potential to remove up to 26 trucks from the road. As well as reducing traffic congestion, the diesel locomotives used for this block train service are, according to statistics published by the Association of American Railroads, estimated to be three to four times more fuel efficient than diesel trucks and lower greenhouse gas emissions by up to 75% compared to trucks.

APM Terminals Gijon is equipped with a 450m on dock track for fast and efficient loading and a separate rail yard with two 350m tracks for optimum flexibility. In the future, the service has the capacity to scale up to a daily service for the cities currently served.