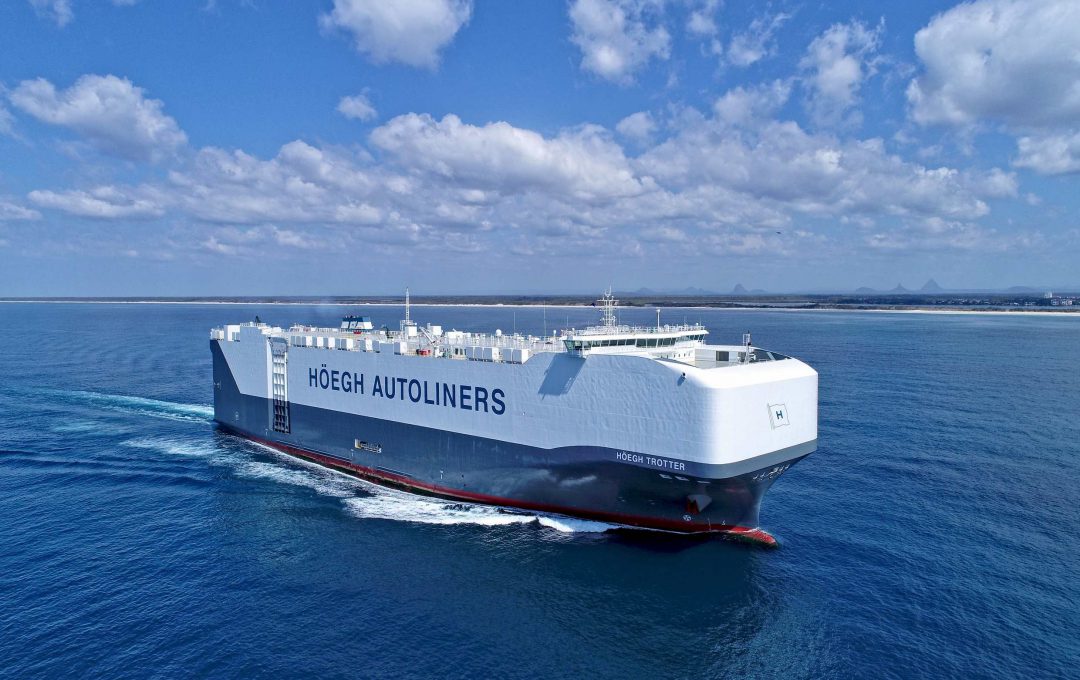 Kongsberg Digital and leading engine manufacturer MAN are entering into a strategic digitalization partnership, formalizing the Memorandum of Understanding (MoU) signed by the two companies in October 2019. The first project undertaken by the partnership will be to deliver joint digital infrastructure to Höegh Autoliners, marking the first step in their stated aim to work together in accelerating the rate of digitalization in the maritime industry and securing greater value for customers on both sides.

The agreement to collaborate in developing digitalization solutions for the maritime sector came about as the two companies realized that their separate efforts in this space were complementary. Kongsberg Digital’s recently launched Vessel Insight – a new, cost efficient data infrastructure solution for the maritime market – is a natural match with MAN’s PrimeServ Assist digital solution for optimization of engine use and maintenance.

Vessel Insight captures contextualized data from vessels and fleets for use in value generating applications for ship owners and operators, so by integrating the data from PrimeServ Assist will be able to provide a more holistic picture for the majority of vessels with MAN two-stroke engines on board. With two major maritime vendors collaborating on a common data infrastructure, customers will benefit from interfacing with one system instead of many, automated data integration, and a larger selection of digital solutions. This will make the digital transformation faster and more cost efficient for customers in the maritime sector.

Cancel reply
Related Topics:MaritimeTechnology
Up Next

Jumbo has shipped two Ship-to-Shore container cranes, together weighing in excess of 1,500 tonnes, from Taicang, China to the Port of Immingham, on the UK’s east coast. The successful completion of the project marks the first time that two cranes of this size have been transported together on a single heavy lift vessel. Jumbo’s client for this contract was Chinese crane manufacturer Nanhua International, delivering the cranes to their final destination of the Associated British Ports-operated Port of Immingham.

In mobilising one of its J-class heavy lift vessels – the Fairpartner – to perform this container crane transport, Jumbo has broken new ground regarding the transport capabilities of its fleet. The two cranes weighed 788 and 810 tonnes apiece, both with heights just under 75 metres above deck.

Moreover, the footprint of the cranes called for some intuitive engineering skills, as is shown by the loading process. “We used the vessel’s own deck-mounted cranes to lift the first container crane onto temporary rails placed in the middle of the deck,” explains Jumbo’s Senior Project Engineer Otto Savenije. “We then moved the container crane forward to its stowage position behind the ship’s accommodation.”

To make this possible, however, Jumbo had to widen the portside of the deck by using the vessel’s own tweendecks as deck extensions. “This created the additional 6.1 metres necessary to hold the rails. However, to offset that extra weight on the portside, we had to position a 100-tonne counterweight on the starboard side during lifting operations.”

The Fairpartner made the voyage from China to Immingham in 36 days, staying below air draught restrictions under the Mubarak Peace Bridge on the Suez Canal by lowering the jibs of the container cranes.

The most technical part of the transport came on arrival at the Port of Immingham. Access to Immingham is gained via a lock that accepts a maximum vessel beam of 26.8 metres. With a more standard cargo, this would be no problem for the Fairpartner. However, the overhanging deck extensions as well as the protruding jibs of the container cranes meant that this would not be a run-of-the-mill lock passage.

Jumbo’s solution was to raise the jibs of the container cranes and to pass the locks at high tide. “After changing our ballast configuration to stabilise the effect of raising the jibs, this meant that we could pass the locks safely, without risking collision with things like buildings, bollards or lampposts on the quayside,” says Otto Savenije. The sight of the actual lock passage was undoubtedly impressive, with just 60cm horizontal clearance to the lock wall and 3 metres vertical clearance from the deck extensions to the quayside.

Two in one, a cost-effective solution

In addition to Jumbo’s engineering skills required for this contract, Jumbo Manager Commerce Shipping Laurens Govers points to the close collaboration that made the project run smoothly. “Transporting two cranes of this size in one go; that is indeed a cost-effective solution. But in order to successfully pull off a job like this, you need cooperation from all parties. As well as the cooperative thinking that we had with our client, we would like to praise the Immingham Port Authority for their help and willingness to consider this transport. They facilitated the project.”

The passage of Jumbo’s Fairpartner through Immingham locks is perhaps best seen in this video.

Port of Oakland import volumes rises up by 10.6% in September

The Port attributed the boost in imports to U.S. retailers stocking up in preparation for the traditional holiday shopping season. Consumer products combined with pandemic-related items such as personal protective supplies helped make September a record-breaking month.

“Several months into this pandemic, we are now seeing positive signs by these cargo volume totals,” said Port of Oakland Maritime Director Bryan Brandes. “As retailers make sure shelves are well-stocked, we’re waiting to see if consumers begin shopping early this holiday season.”

The Port said it’s seeing retailers hedging against another possible COVID wave this winter. Retailers appear to be building up their stocks as they continue to see the spread of more factory closures and lockdowns.

With the aid of AI and digital linking, the Port of Gothenburg will become quicker, more cost-effective, and climate smart. A customised digital platform is due to be rolled out during the second half of 2021. It will enhance freight flow transparency and have a direct impact on productivity, lead times, and delivery capacity throughout the entire transport chain.

“It will be something of a Port of Gothenburg 2.0 that will benefit everyone linked to the port. Having said that, what is truly revolutionary is not just the technical transformation but what will emerge in its wake,” said Malin Collin, deputy CEO at the Gothenburg Port Authority.

The greatest challenge will be to bring together the hundreds of organisations that cooperate and compete for transport at the Port of Gothenburg. Shipping companies, terminal operators, rail operators, forwarding companies, freight owners, and inland terminals each represent an individual thread, and together they will intertwine to form a complex freight transport network.

At present, all those involved use separate IT systems that measure and handle individual elements in the transport chain based on fragmented information. Interaction between them often means dipping into the system manually.

The Gothenburg Port Authority is the network coordinator, which entails unravelling, digitalising, and reconnecting the threads. The plan is for all the fragments of information to be collated and processed using the very smartest technology in an effort to visualise and optimise the numerous processes at the Port of Gothenburg.

“Determining how this unravelled system works is not just a matter of randomly pulling the individual threads. We need to adopt a cohesive approach, working with all the parties concerned, and we are currently building a platform that will help us realise our objectives. What will emerge is a new digital services ‘ecosystem’ for the Port of Gothenburg in its role as a freight hub,” said Joseph Sandwing, Head of Digital Business Transformation at the Gothenburg Port Authority.

With these services, more rapid, high-quality information will facilitate flexible planning and collaboration between the different operators at the port. Data that is made available to us will allow shipping companies and ports to be integrated, with significant environmental gains as a result – through just-in-time arrival for example. Freight owners, rail operators, and terminal operators will be able to track their goods in real time. The response among those are affected has been overwhelmingly positive, and they have already identified the considerable potential that will be generated.

This week the procurement process was finalised with the provider Wabtech, which will be responsible for the technical solution. In the next phase, the Gothenburg Port Authority and Wabtech will lay out a joint project plan, bringing discussions with the various companies at the port to the next level and moving forward during the second half of 2021. What will materialise from this is a platform that can be built on and with at least one application based on three separate data sources.

“We have a vision of being the world’s most competitive port and if we are to deliver on that vision we need to develop our ideas and expertise in partnership. Everyone sitting down and being smart in their own compartmentalised world is no longer sufficient. Instead we need to link up and share what we have in a novel way if are to make the pioneering advances that we have envisaged. There is strong support for this transition throughout the whole of the freight hub, and everyone is looking to develop a smart, sustainable port. We are now getting down to the task of bringing our plans and ambitions to fruition,” said Malin Collin.

Port of Oakland import volumes rises up by 10.6% in September