Konecranes has secured a key contract in the delivery of Automated Port Equipment services. The Kuala Tanjung Multipurpose Terminal (KTMT) recently signed a 12-month automation services contract with Konecranes Indonesia. The port has 8 Automated Konecranes RTGs. The deal was signed in July 2020 and will run until June 2021. Local inverter and digital crane specialists are using Konecranes Augmented Reality apps to liaise with Finnish engineers, ensuring updates, repairs and knowledge transfer are uninterrupted during the COVID-19 travel bans.

The KTMT Terminal is in a remote area of Northern Sumatra, with the nearest town being four hours’ drive away. Konecranes is the leader in the provision of automated port equipment, not least because it has the skills, service footprint and communication tools that looking after advanced port equipment, in any part of the world, demands.

Jukka Tukia, Konecranes APAC Port Services Director, says, “Partnerships and commitment drive our business in the Asia-Pacific region. We have the technology, the training and the drive to ensure that no matter where your equipment is, we will find a way to make our customer’s uptime and operational efficiency our priority.”

Ship to shore cranes at terminals in Finland

Ship to shore cranes at terminals in Finland

Three additional ship-to-shore cranes have been brought into operation at APM Terminals two joint venture terminals in Finland – Multi-Link Terminals in Kotka and Helsinki. The modernisation of the handling equipment will expand both terminals’ capacities and increase the competitiveness of their offering.

The equipment was purchased as part of Global Ports’ ongoing facility upgrade programme. Global Ports is a joint venture that combines the global expertise of APM Terminals (30.75%) with the local knowledge of Delo (30.75%), one of the largest private transportation and logistics holding companies in Russia. The terminals are a joint venture between Global Ports (75%) and CMA Terminals SAS (25%).

A new Konecranes ship-to-shore (STS) crane was brought into operation at Multi-Link Terminals Helsinki last month, replacing an older model. The new crane – measuring 40 metres in boom length, 31 metres in height and 70 tonnes in lifting capacity – is custom designed and developed specifically for the terminal.

Combining the functionality of an STS and a Rail Mounted Gantry (RMG) crane, it enables the accumulation of a shipload under the crane in advance, thereby increasing the speed of vessel handling. It also reduces overall operating costs, as it reduces the amount of equipment and personnel required. The new crane is also capable of handling vessels carrying containers 14 wide on deck.

The next step in Multi-Link Terminals’ STS fleet upgrade will be the modernisation of the existing Liebherr crane, when the height will be increased from 21 to 26.5 metres and boom length will be increased from 30 to 32.5 metres. The Liebherr crane upgrade is expected to be completed this month. The crane upgrade programme in Helsinki has been a part of the ‘Door2Lng’ project headed by Containerships – CMA CGM GmbH and co-financed by the European Union from the Connecting Europe Facility.

Multi-Link Terminals in Kotka received two Ansaldo STS cranes relocated from Hamina port, which complement the existing STS and mobile harbour crane (MHC). The cranes both have a capacity of 40 tonnes under the spreader and an outreach of 32 metres and 38 metres respectively, the latter being the largest crane in Kotka by outreach. 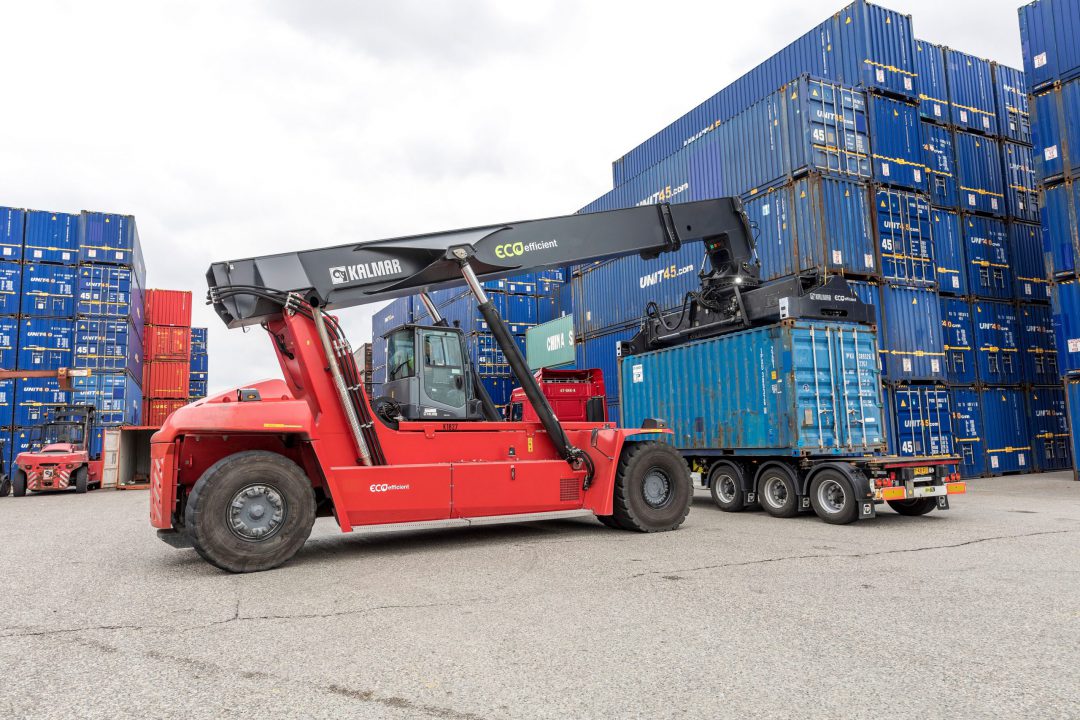 Kalmar, part of Cargotec, has signed a deal to supply two Kalmar Eco Reachstackers that will help Maritime Transport Ltd cut fuel costs and carbon emissions while addressing growing demand at its rail terminal in Wakefield, England. The order, which represents the first collaboration between Kalmar and Maritime, was booked in Cargotec’s 2020 Q3 intake, with delivery scheduled to begin in Q4 2020.

Maritime is a market-leading UK-based intermodal logistics company with a network of 33 container and transport sites across the UK. After reaching an agreement with DB Cargo UK on 1 April 2019, Maritime launched its rail subdivision, Maritime Intermodal, which saw the company acquire four dedicated rail services out of Felixstowe and Southampton. As part of the deal, Maritime also took full responsibility for DB’s railfreight terminals in Wakefield and Trafford Park.

The new Kalmar Eco Reachstackers use a much smaller engine than the reachstacker solutions with large, high-horsepower engines that are traditionally seen in rail intermodal applications. This means they can reduce fuel consumption and therefore NOx emissions by up to 25% without compromising on productivity. They also offer an improved overall driving experience with smoother acceleration and less cabin noise.

Paul Heyhoe, Feet Director, Maritime: “The Kalmar team have provided professional support from the very beginning and clearly demonstrated the positive impact that the Eco reachstacker will have on our fuel consumption and therefore carbon emissions and costs. We look forward to utilising both machines at Wakefield, where they will bring a number of advantages for our valued customers and their supply chains including faster turnaround times and greater operational reliability.””

Dave Patterson, Vice President South & West Europe, Kalmar: “We are delighted that Maritime Transport Ltd have selected the Kalmar Eco Reachstacker for their Wakefield Europort terminal and we are looking forward to building a productive partnership with the company moving forward. The Eco reachstacker, which has now sold in excess of 250 units, is a prime example of our commitment to developing solutions that help customers to minimise their environmental impact while continuously improving their productivity and lowering the total cost of ownership .”

Committed to supporting the Digital India and Ease of Doing Business initiatives, PSA Mumbai has launched a digital online payments solution for Direct Port Delivery (DPD) customers with ODeX. PSA Mumbai’s DPD customers will now be able to process their documentation and pay terminal handling charges on the ODeX platform from 15 September 2020.

One of the users in the pilot testing round, Director of Mungekar & Sons CHB Pvt. Ltd, Mr Prathamesh Mungekar said, “We are very happy with this new product, a first in the JNPT area and one which streamlines our operations. We are already looking forward to more developments.”

Managing Director of PSA Mumbai, Mr Sivakumar K said, “A rapid and seamless flow of information between terminal and users is as important as the physical flow of containers through the terminal. This product gives our DPD customers a fast, efficient and secure payment and documentation system to take delivery of their goods as soon as possible. With ODeX’s extensive user base, it is well positioned for widespread adoption.”

Managing Director of ODeX, Mrs. Liji Nowal said, “It is a great milestone for ODeX to Go-Live with our ePayments solutions for PSA Mumbai’s customers. Customers can now pay through a single click on ODeX – and the payment is confirmed in real time to PSA Mumbai. Thus any payments delay in cargo release is completely eliminated. During the current pandemic, PSA Mumbai has been very responsive to the needs of customers and I must congratulate the PSA team for ensuring that we have gone live very quickly with this solution, and becoming the very first terminal to offer seamless ePayment solutions on ODeX to customers. We are now “live” for DPD delivery payments – and soon hope to extend this facility to more customers.”