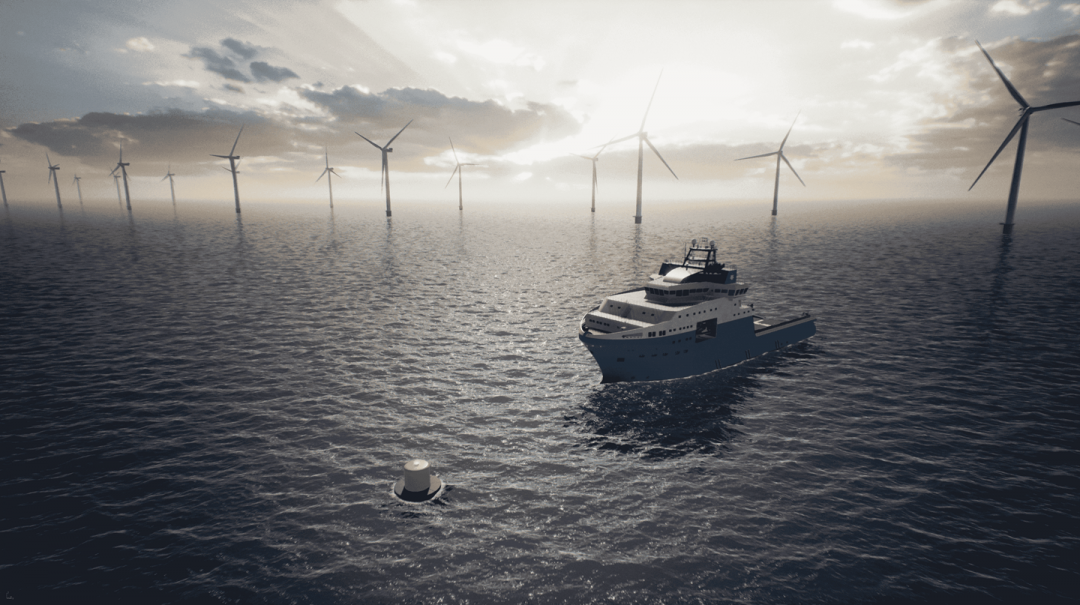 Maersk Supply Service and Ørsted to test offshore charging buoy to reduce vessel emissions. Image: Orsted
Maersk Supply Service A/S and Ørsted, the world leader in offshore wind, have formed a partnership to test an innovative charging buoy that can bring green electricity to offshore wind farm service vessels and potentially to a wide range of maritime vessels. The buoy can be used to charge the smaller battery- or hybrid-electrical vessels and to supply power to larger vessels, enabling them to turn off their engines when laying idle. By substituting fossil-based fuels with green electricity, virtually all emissions are eliminated while the buoy is in use.

The proto-type buoy has been developed by Maersk Supply Service while Ørsted is responsible for the buoy’s integration with the electrical grid at the offshore wind farm. The charging buoy will be tested in the second half of 2021, where it will supply overnight power to one of Ørsted’s service vessels.

Upon technical validation and commercial ramp up, the electrical charging buoy has significant potential, short to medium term, to contribute positively to reduce emissions for the maritime industry. This will happen through displacing tens of thousands of tons of fuel consumed every year in the wider maritime sector by enabling inactive vessels to turn engines off and replace energy consumption and charge batteries with renewable electricity. Within five years of global operation, Maersk Supply Service has the ambition to remove 5.5 million tons of CO2, additionally avoiding particulate matter, NOx, and Sox.

Ørsted intends to make any intellectual property generated in designing the integration of the buoy into the offshore wind asset publicly available to maximise the uptake potential of this carbon reduction innovation across the offshore wind sector.

As large parts of the global maritime fleet are getting ready to receive shore power in ports, timing is right for implementing this clean ocean-tech innovation. The charging buoy is applicable as a mooring point outside ports, in offshore wind farms, and near vicinity to other offshore installations. Additionally, it will further help limit the increasing vessel congestions and remove air pollution in port areas.

“The charging buoy tackles a multitude of problems; lower emissions, offering a safe mooring point for vessels, better power efficiency and eliminating engine noise. This is also a solution that can be implemented on a global scale, and one that can be adapted as the maritime industry moves towards hybridisation and electrification,” says Jonas Munch Agerskov, Managing Director for Offshore Renewables at Maersk Supply Service.

“Ørsted has set the ambitious target of having carbon neutral operations in 2025, which includes the operations of our offshore wind farms. Technical and commercial innovation is central to Ørsted’s ability to provide real, tangible solutions to achieve our operational ambitions – and we need our partners’ support. We are happy to team up with Maersk Supply Service to test this innovative charging buoy, which brings us a step closer to creating a world that runs entirely on green energy,” says Mark Porter, Senior Vice President and Head of Operations at Ørsted Offshore.

For the demonstration phase of the project, Maersk Supply Service has received one of the largest EUDP grants (Energy Technology Development and Demonstration Programme, under the Danish Energy Agency) in 2020 supporting with DKK 22 million to the engineering and demonstration of the power buoy. The Danish Maritime Fund has provided initial support to conceptualise the project.

Damen Shipyards Group has recently completed the extensive rebuild of cutting-edge research vessel OceanXplorer at Damen Shiprepair Rotterdam. The vessel will contribute significantly to OceanX’s mission – to explore the ocean and bring it back to the world. In this way, the initiative aims at the building of a global community engaged with understanding, enjoying and protecting our oceans.

Upon completion of the project, OceanXplorer has become the most advanced exploration, research and media vessel in the world. As OceanX’s new flagship, she builds on the legacy of the organisation’s first vessel, Alucia and takes things to the next level. Equipped with a series of submersibles, sonar arrays, manned submarines, an ROV and AUV, OceanXplorer is able to explore and map the depths of the oceans.

The vessel is able to collect live samples and bring them aboard where they can be analysed by scientists in state-of-the-art laboratories – with the capabilities, amongst other things, to carry out DNA sequencing.

OceanXplorer’s outstanding research facilities are paired with Hollywood quality filming and media studios – developed in partnership with renowned filmmaker James Cameron. With this, the vessel’s findings can be live-streamed to audiences worldwide at the exact moment of discovery.

Damen served as main contractor in this complex and challenging project, fulfilling an extensive scope of work that brought together various disciplines from across Damen Shipyards Group – including offshore and survey newbuild, repair & conversion and yachting specialisms.

The project required Damen to rebuild the vessel – a former offshore survey ship – in essence from the main deck upwards by stripping the existing accommodation and adding a complete new and much larger accommodation to house the new laboratories, workshops and submarine hangar. Also a fully integrated heli hangar was added to the superstructure as well as extensions on both sides of the accommodation decks to house new cabins over the (increased) full beam of the vessel. Following the structural part, the work included overseeing the complete integration of all ship’s systems including specialist hydrographic and laboratory systems and an innovative IT infrastructure to facilitate the combination of state-of-the-art research facilities with the on board Hollywood standard cinematography and media studios.

Damen worked closely with OceanX’s specialist teams, developing the scope of the project in order to fulfil all requirements. This included responsibility for the interior and exterior of the vessel. The ship is unique in its combining of up-to-the-minute research facilities – courtesy of renowned naval architects Skipsteknisk – and top-of-the-line interior accommodations, designed by Christina Fallah. The vessel’s additional interiors as well as its exterior were styled by Steve Gresham.

The project also required Damen to undertake a docking scope, including removal and refurbishment of azipull and bow thrusters, blasting and coating of tanks and complete overhaul and upgrading of crew accommodation.

Tjarco Ekkelkamp, project director for the OceanXplorer project at Damen said, “This has been a challenging project, the result of which we are very proud of. On the one hand, this shows the extensive capabilities of Damen as a group – the powerful synergies within our group, covering both newbuild and repair & conversion capabilities and spanning commercial vessels and superyachts. On the other, this is a vessel that represents a force for good in the world – one that will enhance human involvement, understanding and ultimately conservation of our oceans. With our strong commitment to maritime sustainability, we are delighted to have played our part in the development of OceanXplorer.”

ABB is designed for easy integration on all ship types and is controlled from the vessel itself, so that sequencing does not need intervention by any shore-based staff. Its sustainable in-harbor operation is especially valued at city ports such as Tallinn, which can have a significant impact on local air quality. Given the frequency of port calls made by Viking XPRS, shore connection will also save substantial amounts of fuel.

Earlier this year, Port of Tallinn installed the latest ABB shore power systems on five of its piers in Old City Harbour as part of the first shore power project in Estonia, enabling vessels with shore power technology to draw on land-based power in port.

“ABB’s shore connection is the latest initiative in our ongoing sustainability program,” said Johanna Boijer-Svahnström, Senior Vice President, Corporate Communications, Viking Line. “Installing the shore connection system on board Viking XPRS, and having the shore power available in the Port of Tallinn will make a significant contribution to clean air within the port and its surroundings. We have successfully collaborated with ABB on a number of projects, and the fact that ABB provides installations aboard ship and in port, with prompt delivery and backed up by 24-hour support, has proved compelling.”

“It is an honor to support Viking Line in its journey toward sustainable shipping,” said Jyri Jusslin, SVP and Head of Service at ABB Marine & Ports. “Our shore connection is designed for all types of ships, with safety and simplicity in mind. This is also another key step in ensuring that Baltic Sea ports continue on their forward-looking path to eliminate emissions.”

ABB’s full scope of supply for Viking XPRS included a shore connection control board with three separate ship-shore communication links, ensuring fail-safe connections at all times. ABB has also provided the medium-voltage switchgear, an 11kV-400V transformer, a circuit breaker bypass arrangement for drydock connection, and a low-voltage main switchboard breaker. The delivery meets the new IEC-standard for shore connections, which demand higher levels of safety and environmental performance than ever before at the shipside. Commissioning was executed during the vessel’s normal operation.

As a leader in electric shipping and smart port technology, ABB Marine & Ports offers comprehensive shore connection solutions comprising state-of-the-art infrastructure both onshore and on board ship. Systems are compliant with international regulations and include high- and medium-voltage switchgears, transformers, frequency converters, control and protection systems, and more.

ESPO highlight “the impressive work of Valenciaport with the environment”

Port Authority of Valencia
ESPO highlight “the impressive work of Valenciaport with the environment”. Image: POA

ESPO – The European Sea Ports Organisation has congratulated Valenciaport on the renewal of the Port Environment Review System (PERS), the environmental management standard for EcoPorts, an “impressive” milestone which represents the sixth PERS certification for Valencia.

Isabelle Ryckbost, ESPO’s Secretary General said “the Port of Valencia is a longstanding member of the EcoPorts community, having joined as long ago as 2003. Valencia’s continuous engagement with environmental issues – and perseverance in identifying and addressing new issues when they arise – is testament to their hard work and ambition and can serve as example to other ports”.

As background, PERS certification requires the port to put forward a range of measures to demonstrate effective environmental management. These measures range from identification and monitoring of the most pertinent environmental challenges to enhancing communication with the local community and increasing transparency through creating and publishing an environmental report.

“I am very happy with the commitment and dedication showed by the Port of Valencia when it comes to environmental management and involvement in the Ecoports community. Its continuous engagement with environmental issues is coupled by a willingness to identify and address new issues when they arise. The PERS certification is evidence of their ambition to tackle the challenge posed by climate change. So I congratulate the port once more and I look forward to having them as key members of our EcoPorts community for many years to come’ commented the EcoPorts coordinator, Valter Selén.

The number of PERS Certified ports currently stands at 23, around a fifth of the 116 ports in the Ecoports Network. Compliance with the PERS standard is independently assessed by Lloyd’s Register, with the certificate having validity of two years.

Valenciaport is part of the “EcoPorts” network of ports which is the main environmental initiative of the European port sector and whose objective is to improve environmental management and create awareness of environmental protection through cooperation and the exchange of knowledge between the different ports.

Valenciaport has a firm commitment to 2030, zero emissions, in order to be two decades ahead of the targets for decarbonisation and the reduction of greenhouse gases that Spain, Europe and international organisations have projected for 2050.  The actions and investments planned by the APV have been developed for many years now under the shared guideline of the port community to make growth and sustainability compatible.