Connect with us
Tideworks announces joint venture with Brenock to provide technology solutions for the cruise industry. Image: Pixabay

The two companies will collaborate by leveraging complementary strengths to deliver enhanced management tools and solutions to their customers.

The cruise lines and marine terminals are facing unprecedented disruption during the COVID-19 pandemic, with widespread suspension of services and concerns about the safety of workers and cruise passengers.

Through the joint venture, Brenock and Tideworks, with the support of Tideworks’ parent company, Carrix and sister company, SSA Marine, will deliver solutions to help the cruise line community optimize and automate processes as they rebuild from economic setbacks and adjust to new health and safety standards onboard.

Carrix has expanded and developed its business to support the industry’s changing needs; this joint venture is a continuation of these investments to deliver exceptional service to customers and partners around the world.

“We are eager to partner with Brenock to provide technology solutions to cruise lines and terminal operators to help them increase efficiency and save costs,” said Thomas Rucker, president at Tideworks. “With Brenock as an ally, our collective technology and expertise can help improve operations, solve mission-critical problems for our customers and partners and make a positive impact on their business.”

“The disruption to the cruise industry has been unprecedented,” said Jason Grant, vice president of fleet technology with Holland America Group. “We are excited about Tideworks’ and Brenock’s joint venture as we evaluate solutions tailored to our industry and the opportunity to increase collaboration across the maritime sector.”

The joint venture will also provide growth opportunities for Tideworks’ and Brenock’s customers with industry focused innovations and solutions that will facilitate cost savings and enhanced productivity.

The construction of Finnlines’ newest vessel to start

The Mayflower Autonomous Ship (MAS), an AI and solar-powered marine research vessel with a view to traverse oceans collecting crucial environmental data has been launched.  The new fully autonomous trimaran was lifted into the waters off the coast of Plymouth, England.

Following two years of design, construction and training of its AI models, the new fully-autonomous trimaran was lifted into the waters off the coast of Plymouth, England ahead of its official launch tomorrow.

Designed to provide a safe, flexible and cost-effective way of gathering data about the ocean, the new-generation Mayflower promises to transform oceanography by working in tandem with scientists and other autonomous vessels to help understand critical issues such as global warming, micro-plastic pollution and marine mammal conservation. ProMare is co-ordinating the scientific studies working with IBM Research and a number of leading scientific organizations.

“Able to scan the horizon for possible hazards, make informed decisions and change its course based on a fusion of live data, the Mayflower Autonomous Ship has more in common with a modern bank than its 17th century namesake,” said Andy Stanford-Clark, Chief Technology Officer, IBM UK & Ireland. “With its ability to keep running in the face of the most challenging conditions, this small ship is a microcosm for every aspiring 21st century business.”

To enable followers around the world to stay updated with MAS as it undertakes its various missions, IBM and ProMare have today launched a new interactive web portal. Built by IBM iX, the business design arm of IBM Services, the MAS400 portal is designed to provide real-time updates about the ship’s location, environmental conditions and data from its various research projects. Live weather data will be streamed from The Weather Company, as MAS is receiving forecast data and insight from the new IBM Weather Operations Center.

The portal even features a seven-armed, stowaway octopus chatbot called Artie, who claims to be hitching a ride on the ship. Powered by IBM Watson Assistant technology and created in partnership with European start-up Chatbotbay, Artie has been trained to provide information about MAS and its adventures in a lively, and accessible format.

“MAS400.com is one of the most advanced ocean mission web portals ever built,” says Fredrik Soreide, Scientific Director of the Mayflower Autonomous Ship project and Board Member of ProMare. “Protecting the ocean depends on our ability to engage the public in important matters affecting its health. This MAS400 portal is designed to do exactly that and tell people where the ship is, what speed it’s travelling at, what conditions it’s operating in and what science we are conducting. Users can even help Artie the Octopus fish out surgical masks, cigarette butts and other increasingly common forms of ocean litter from a virtual ocean of facts and data.”

MAS will spend the next six months in sea trials and undertake various research missions and voyages before attempting to cross the Atlantic in Spring 2021. MAS’s transatlantic voyage will be based on a similar route and pioneering spirit to the 1620 Mayflower which made the same crossing 400 years ago. 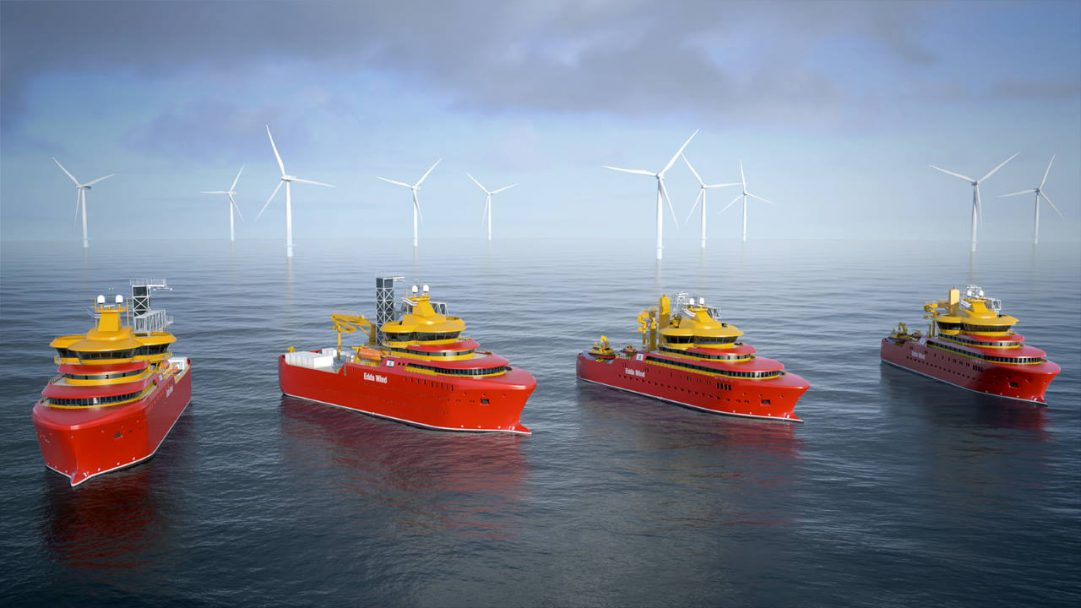 Launched in 2018, Edda Wind owns and operates service vessels supporting the maintenance work conducted during the commissioning and operation of offshore wind parks.

“The Wilhelmsen group’s strategy is very clear, to further expand into renewables, by working together with partners, and leveraging our expertise and assets. So, finding an opportunity like this to work with Østensjø and invest in Edda Wind, a growing company, rapidly expanding its fleet with future-focused emission free vessel technologies is ideal,” says Thomas Wilhelmsen, CEO of the Wilhelmsen group.

Commenting on potential synergies, he adds, ”With our unrivalled global network, decades of in-depth logistical and operational expertise, and experience in the renewable space, through our NorSea and Elevon interests, Wilhelmsen is uniquely equipped to help unlock Edda Wind’s enormous potential. We also know a thing or two about hydrogen as a marine fuel, which might come in handy for the future vessels.”

“We are very pleased with having Wilhelmsen as our partner in Edda Wind. During Østensjø’s 50-year long history of advanced offshore operations, we have gained experience and knowledge that has enabled us to become a significant supplier of service operation vessels within offshore wind. Wilhelmsen’s strong brand, competence, and global position, combined with both companies’ ambition to develop new green solutions, will further strengthen Edda Wind’s position to become a world-leading provider of offshore wind services. We have learned to know Wilhelmsen as a solid and knowledgeable company that stands for many of the same values as Østensjø Rederi, which makes me confident that this partnership will be both long-lasting and successful,” says Johannes Østensjø, owner of the Østensjø Group.

Reflecting the rapid development of the offshore wind market, Edda Wind currently has two vessels in service, and four cutting edge, low–emission service vessels on order with yards. Long-term charter agreements are in place for two of the newbuilds ahead of their expected delivery in 2022. Østensjø Rederi will continue to manage the Edda Wind fleet.

With clear ambitions to target growth regions such as the US East Coast and Asia, the time was right for Norwegian towage and offshore service vessel owner Østensjø to join forces with a forward looking, experienced global maritime partner like Wilhelmsen, willing and able to play an active role in taking Edda Wind to the next level.

The technology group Wärtsilä has successfully delivered its brand-new Cloud Simulation solution to Abu Dhabi Maritime Academy. Comprising a combination of cloud-based solutions, including navigational, engine room and liquid cargo handling simulators, Wärtsilä is the first company to offer class-approved cloud-based simulation technology to the maritime industry. The online installation was deployed in early July, allowing the Academy to continue providing its training despite ongoing social distancing and travel restrictions.

Abu Dhabi Maritime Academy is the leading maritime training provider in the region, which is now powered by Wärtsilä Voyage technology. The addition of the online installations of NTPro and TechSim will broaden the simulation-based training offering available at the Academy.

Cloud Simulation technology takes simulation beyond the boundaries of the physical classroom, to provide location and device independence, and to deliver simulation-based training wherever, whenever, and however it is needed by the user.

Remote access to training allows students and instructors to reach various Wärtsilä Voyage simulation models on their personal devices, away from the classroom and without the need for specific Wärtsilä software. Both the TechSim and NTPRO platforms in the cloud provide a classroom configuration with trainer and multiple student stations for familiar instructor-led training.

“We are excited to be at the leading edge of this technology in the maritime industry and enable trainees to acquire a wide range of navigational and engineering skills, without the need to physically attend the training centre. By having remote access to the simulation library and any classroom-based exercise, instructors can easily manage the application and deliver the training,” says Torsten Büssow, Director, Wärtsilä Voyage.

“We are very pleased to have this next-generation of blended-learning solutions delivered by Wärtsilä Voyage. The bespoke training that this solution allows to deliver will undeniably enhance the training experience of our students. The Wärtsilä Voyage distance learning application will surely open up many new training opportunities inside and outside the physical classroom”, comments Capt. Clive Hotham, Head of Marine Short Courses and Simulator, Abu Dhabi Maritime Academy.