Aurelio Martínez: “The technological development of the Port Terminals will improve the competitiveness of the Port”. Image: Port Authority of Valencia

The companies CSP Spain and APM Terminals in Valencia will soon begin their technological adaptation to a new operating system that represents a firm commitment to the technological development of the Port of Valencia and will make operations safer, smarter and more sustainable.

“A project that joins the development of other major strategic objectives of the PAV of eco-sustainability or energy efficiency aimed at increasing competitiveness. Our connectivity and our stopover times involve the entire Port Community. All the improvements that are implemented in this sense will be a reinforcement of our competitiveness”, explained Aurelio Martínez.

The CSP Valencia and APMT Valencia terminals are going to migrate their computer systems and implement a new program -NAVIS4- that will provide greater security and sustainability to operations. This new investment in software will allow them to understand and increase the speed of operations; improve customer service and capitalize on new business opportunities; increase productivity by minimizing project risks and costs; and collaborate with shipping companies to optimize operations.

The NAVIS4 program is considered one of the most advanced management systems for these operations and is already implemented in more than 320 port terminals worldwide, including those located in the most important ports.

Precisely along these lines, and as part of the satellite activities being carried out in the PAV environment, a project being developed by Infoport, Fundación Valenciaport and the company Hiades will soon be announced. This will enable the implementation of a computer application to NAVIS-4 to manage information from before the arrival of the ships in port. 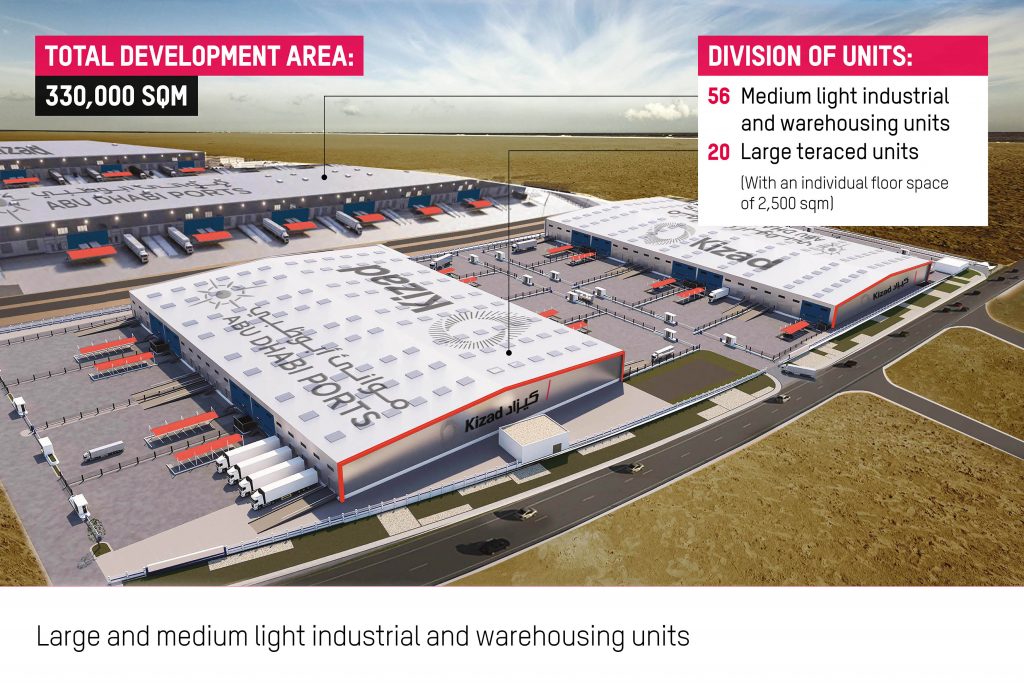 The range of small-to-medium light-industrial warehousing units comprise the fourth, fifth, sixth and seventh phases of the KIZAD Logistics Park and are set to be introduced to the market starting from the end of the year to cater to increasing customer demands for additional ready to move facilities.

Abdullah Al Hameli, Acting Head of Industrial Zones Cluster, Abu Dhabi Ports, said: “Industrial activity and warehousing demand has been quite resilient, and we are confident that launching these ultra-modern units will propel tremendous growth in Abu Dhabi’s manufacturing base. Customers are looking for flexible and asset-light options, and we are expanding our portfolio to address these needs through the launching of a new modular, pre-built units in various sizes and configurations.

“With the availability of options to buy or lease warehouses based upon a business’s individual requirements, investors are benefit from our flexible offers for low-cost operations at scale as well as our ability to offer the region’s lowest utility costs. This is complemented by the unique location at the industrial heart of the UAE, and its direct access to global markets via our flagship deep-water port, Khalifa Port.”

Located in KIZAD Area A, all modules will be equipped with raised floors, open loading yard access for trucks and forklifts, ample on-site parking will include their own office area with toilets and kitchenettes.

KLP’s launch is the latest in a series of recent developments announced by the Middle East’s largest industrial zone. Earlier this month, KIZAD broke ground on a dedicated Truck Plaza, the largest in the region, to meet the needs of truck drivers and the zone’s growing industrial community.

The Plaza, roughly equal in size to 12 soccer fields, comprises shaded truck, bus and car parking spaces together with a community centre, a fuel station, and several retail outlets including a convenience store, restaurants, a car care service, and a mosque. 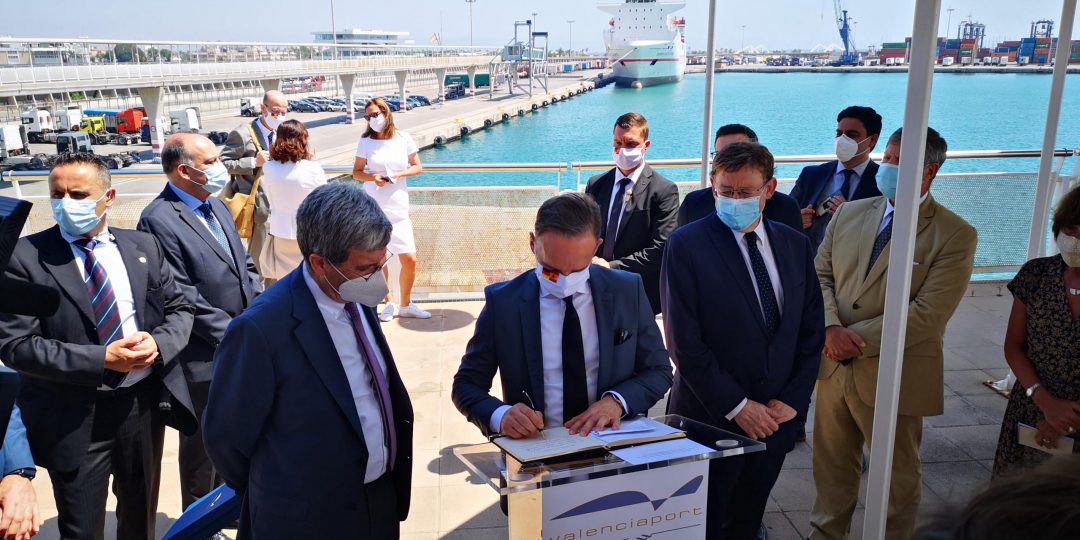 The German Minister of Foreign Affairs visits the Port of Valencia and expresses his wish to increase cooperation with Spanish ports. Image: Port Authority of Valencia

The German Minister of Foreign Affairs, Heiko Maas, has been received in the Port of Valencia by the President of the Generalitat, Ximo Puig and the President of the Port Authority of Valencia, Aurelio Martínez. Heiko Maas has shown interest in the Valencian terminals; a port whose potential in the export sector he knows perfectly (his father worked in the Ford factory in Almussafes).

Maas has signed in the Valenciaport’s book of honour and has travelled along one of the gangways through which cruise ship tourists pass to access the ships.

From the top floor of the Trasmediterránea terminal, and with a view to the passenger and container terminals, the President of Valenciaport explained to the German Minister that the Port of Valencia closed the 2019 financial year with 5.5 million containers; a figure that places it as the leading and strategic port in Southern Europe, with traffic volumes that range from almost 10 million TEUs in the German port of Hamburg to 4.4 million in Bremen (the second largest port in Germany).

In this sense, Aurelio Martinez explained to the German president that Valenciaport is making an effort in investments and future projects to continue being the great strategic reference of European ports in the Mediterranean. “We are a great port in terms of traffic, efficiency, call times and connectivity and we also want to be a great port in terms of decarbonisation and climate change actions”.

About the port of Valencia, Heiko Maas said that “it is a great port, with a volume of traffic and business that could be placed halfway between the German ports of Hamburg and Bremen, the first and second German port. Between the German and Spanish ports, such as Valencia, there are numerous cooperation and investment projects, and my wish would be to increase this cooperation. There is great potential between the two sides, and that is precisely what we are working for today in Valencia”.

In response to questions from German journalists about the coronavirus crisis and the tourism sector, Heiko Maas explained that “the Spanish government has taken very drastic measures and has maintained them for a long time and is currently working in collaboration with Berlin to see what kind of measures it can take to carry out a de-escalation with guarantees. We are working to see how tourism will be this summer, and we are seeing very responsible behaviour from Spain. I am very confident that thanks to these measures taken by the Spanish government, tourism in Spain will be able to be done in a very safe way”.

“In fact, -Maas continued- we have established protocols to see models of action in the case of possible positives; and therefore, the Spanish-German collaboration is being extremely fruitful.  I am very confident that we can do our part. This summer’s tourism in Spain will be different, but thanks to the measures that have been adopted, it will be a tourism that meets all the guarantees”.

“It is my wish, -Heiko Maas expressed- that all German tourists who want to spend their holidays in Spain behave in a very responsible manner and that they respect all the rules that are being imposed, which are very different from those we knew before. This self-responsibility is very important so that everywhere in Europe we avoid all possible outbreaks”.

Valenciaport, a reference point in Europe

Valenciaport mobilized around 5.5 million containers in 2019, while the main German ports such as Hamburg and Bremen managed 9.3 and 4.8 million, respectively. In terms of tonnes of goods, APV ports operated over 81 million, compared to 136 million in Hamburg and 69 million in Bremen. In the movement of cars, we must point out the more than 722,000 vehicles that were managed in the facilities of Valenciaport, while in Bremen this figure reached 2.1 million, a service that does not operate the port of Hamburg.

The president of the PAV explained to the German minister that “Valenciaport closed the 2019 financial year with 5.5 million containers, placing it as the 5th port in Europe. Valenciaport is the connection of the Mediterranean with more than 1,000

At the forefront of innovative projects

Valenciaport is cooperating with German ports and entities in around fifteen projects related to the reduction of the carbon footprint, mobility of people and goods, cyber security, big data, improvement of logistic connections, environmental sustainability or circular economy, among others. “Cooperation between European ports is essential for Europe to continue to move forward on the path to improving the competitiveness and sustainability of the logistics chain and the entry and exit of goods to other parts of the world, hence the importance of creating synergies and common front to place us at the forefront of ports,” said the president of the PAV.

Thus, among the collaboration projects, it is worth mentioning the COREALIS initiative, with NEC Laboratories Europe, which proposes a strategic and innovative framework, supported by disruptive technologies, including IoT, data analysis, next generation traffic management and 5G, for ports to manage capacity, traffic, efficiency and future environmental challenges.

Also noteworthy is the PROUT project, in collaboration with Wuppertal Institut Fur Klima for the improvement of urban mobility of both passengers and goods in cities, or the DATAPORTS initiative to promote data integration for the use of the port community, a project being developed by the APV in collaboration with the University of Duisburg-Essen and Fraunhofer Gessellschaft Zur Foerderung der Angewandten Forschung.

Another outstanding action is the GREEN C PORTS project, together with the Valenciaport Foundation, which aims to achieve, through digitalisation, an increase in the efficiency of port operations, the promotion of the environmental sustainability of the Port and the environmental performance of operations in which the German ports of Bremerhaven and Wilhemshaven also participate.

In addition, the LOOP-PORTS project is being developed with the University of Hamburg. This is funded by EIT Climate-KIC and aims to facilitate the transition to a more circular economy in the port sector by creating a Port Network in this area that will provide an innovation ecosystem around port activity and stimulate the dissemination of circular economy initiatives. 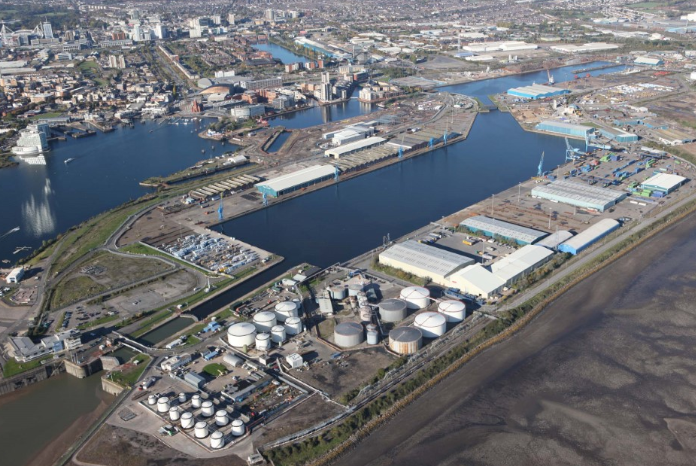 The Port of Cardiff has celebrated the start of a new contract with Valero, a global refiner specialising in the manufacture of transportation fuels and petrochemical products, which will help power the economy of Wales’ Capital city and the wider region.

The Port of Cardiff has celebrated the start of a new contract with Valero, a global refiner specialising in the manufacture of transportation fuels and petrochemical products, which will help power the economy of Wales’ Capital city and the wider region.

The new long-term agreement includes occupation of a 12-acre storage and distribution terminal adjacent to ABP’s Roath Dock in Cardiff which will be fed by coastal tankers utilising Cardiff’s multimodal and deep-sea connectivity.

As part of the agreement, Valero will be importing predominantly road fuels, including petrol, ultra low sulphur diesel (ULSD) and biofuels, as well as heating fuels, into Cardiff for distribution to the regional market in South Wales.

Valero utilises a coastal shipping service linking its West Wales refinery in Pembroke to its network of storage and distribution terminals around the UK and Ireland, with expectations to handle considerable liquid bulk tonnage through Cardiff every year.

ABP’s Port of Cardiff’s strategic location facilitates access to a market of 1.5 million people living in the Cardiff Capital Region, which equals approximately half the population of Wales.

In preparation for the new contract, ABP has made significant investments in enhancing port infrastructure, including investing  more than £400,000 in jetty infrastructure upgrades and recently completion of a five year programme to replace both the inner and outer lock gates, representing a £5 million investment to secure  marine access for the next 50 years. ​​​​​​​

Andrew Harston, Regional Director for ABP’s Wales and Short Sea Ports, said: “Valero is a great example of a company that is able to use sea transport for the 100 mile journey from Pembroke to Cardiff.

“ABP has a longstanding relationship with Valero and we look forward to this continuing our collaboration into the future with this new agreement.”

ABP owns and operates 21 ports across the UK, located in close proximity to important domestic industrial clusters, logistics hubs and major conurbations. ABP owns a total of 3,743 ha of freehold land, which includes 960 ha of strategic development land in prime locations across the country.